"anywhere you want to go" 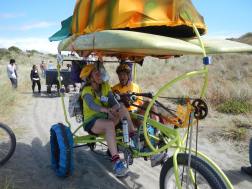 Our first offering to the public is our Sociable Tandem Cargo Trike. We designed, built and have been riding ours around for around a year, now, and we love it!

You can be one of 10 folks to Pre-order and receive a Basic Model Cargo Cruiser for $1,950. Click on the “Pre-order” link, up above, to get started.

Facts about bikes and trikes: Did you know that “99% of the bicycles sold in the United States are made in either China (93%) or Taiwan (6%).” We know that the current infrastructure needs to change to encourage safe and fun trike riding in California. We also know that since 99% of bikes are currently made in China (96%) and Taiwan (4%) that we need to encourage the GoLocal movement to make inroads into the bike building community.

One thought on “About”